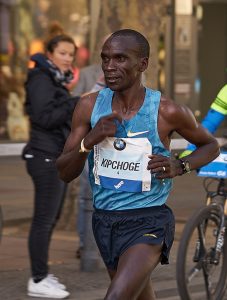 The East African tropical nation of Kenya has a long-standing reputation of producing track events rulers. This is especially so in the middle and long-distance in races, where the nation’s athletes often sweep the podium.

There are a number of great runners from the country, but the freshest one who has been causing ripples in the running circles in recent times is marathon runner Eliud Kipchoge. The 34-year old former 5000-meter champion has been dominating the marathon in recent years, almost making it look easy to clear the 42-kilometer race.

Kipchoge shaved an entire minute and 18 seconds on top to set a new marathon World Record by running a 2:01:39 race at the 2018 edition of the Berlin Marathon. Before that, he had finished top at the Rio Olympics. He is one of very few runners to make the switch from track to road running and succeed at it.

Kipchoge has taken part in 13 marathons as of August 2019 and won an incredible 12 of those. Notably, the only loss he suffered saw Wilson Kipsang set a new World Record at the 2013 Berlin Marathon. Kipchoge would shatter the record at the same venue five years later.