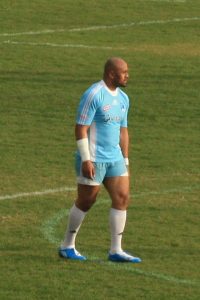 Jonah Tali Lomu. That is a name that resonates nostalgically with every rugby lover of this and a few past generations. The New Zealander’s contribution to the odd-shaped-ball game is one that evokes nothing but admiration.

Jonah broke into the rugby limelight when he appeared for New Zealand at the 1995 Rugby World Cup. The six-foot-five winger sent waves in the game that can never be forgotten. He was raining tries everywhere, scoring four against England alone to end the tournament with seven tries.

Sadly, he was found with acute kidney condition nephrotic syndrome in the same year. The diagnosis did not slow Lomu down; he went ahead to star for his nation and the game at large. He was back at the World Cup in 1999, more than doubling his 1995 tally to end the tournament with 15 tries.

At the time, however, his condition was worsening and he was put on dialysis in 2002. The trying period of Lomu was one during which he showed great strength that resonates to date. He kept fighting until 2015 when he finally passed on at the age of 40. A charity fund set up after his death saw the site crash due to an overflow of visitors.